In 2014, after a proud history producing metallurgical coke, the Corrimal Coke Works closed its doors. As a place of ongoing importance to the people of Corrimal and the Illawarra region, the Illawarra Coke Company (ICC) and Legacy Property plan to transform the derelict site into a vibrant community that serves and benefits the current and future residents of Corrimal and the Wollongong region.

Our rezoning proposal for this unique 18-hectare property represents the largest brownfield urban renewal project in the Illawarra and will provide a catalyst for the growth of Corrimal into its identified role as the major centre for the northern suburbs while showcasing Wollongong’s future as the city of innovation.

With its location directly adjacent to the Corrimal train station and proximity to a broad range of services and amenities, Corrimal Coke Works represents the best location for new housing development in the northern suburbs of Wollongong. 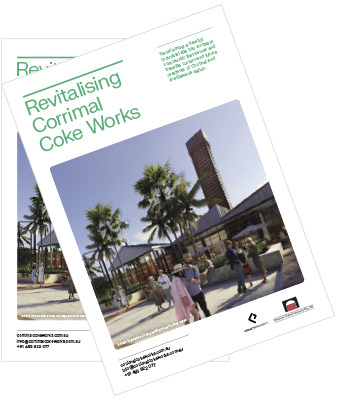 Investing in the Future of Corrimal and Wollongong

In line with the Coke Work’s proud history of being a major contributor to the area, our plan is to bring a significant number of new jobs and opportunities to Illawarra locals.

For many decades the Corrimal Coke Works has been inaccessible to the community, dividing the Corrimal escarpment from its coast. Our plan is to reconnect Corrimal and create a place that is open to all.

Nearly 50% of the site will become public green space and existing degraded environments will be rehabilitated.

Further opportunities for leading sustainability initiatives will be explored in the future as part of the detailed building design.

We are committed to ensuring the local community is kept updated throughout the planning process. During the public exhibition period, ICC will continue to actively consult with the community, updating this website, responding to questions and through holding information sessions in the local area.